"The one who's behind everything!"

Yosuzume is a Rank S world boss in the Hunting House that appears during the Kari Gumi Vs Egg Hunting Bosses event. This world boss can only be battled by players who have defeated, or paid to skip, Kari Mori, Shi To, and Soft Claw.

Yosuzume utilizes Swift Release techniques and she can use the Hidden Silhouette talent. She also has Zen, her pet. 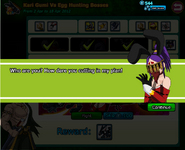 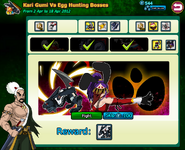 Retrieved from "https://ninjasaga.fandom.com/wiki/Yosuzume?oldid=29320"
Community content is available under CC-BY-SA unless otherwise noted.