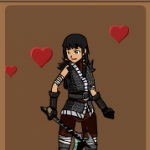 Hey! Thanks for finding the time to click on my name =) Feel free to read and write on my message board about anything Ninja Saga-related. or even not. Also, feel free to read through this big-bottle-of-crazy-sauce that is my profile. =D (yeah, I'm weird)

So about my Ninja Saga avatar...

User type: Free User (I wanna get an Emblem T.T)

Class: Intelligence (Is the spelling correct?)

Extreme Talent: Deadly Performance (A friend of mine suggested this)

[Revealing? yup, but i dont go on PVP too much anyway]

Other nonsense stuff about myself (..I'm gonna have to work on that title...)

SOOOOO...yeah, I really really wish I had an emblem...and a clan...and 2000 tokens...but, well, I don't really have a lot of cash. BESIDES! Buy it? I live in the Philippines, and am a proud Filipino (*ahem* that's what we're called, in case you don't know *ahem*) and the cost of Emblem is way too large for my family's income. I'd rather save it for my college fund.

Hey, if anyone stumbles along my profile, who's a clan master, please please please please accept! I really really wanna participate in the clan wars, but no one has accepted me. I know that the clan Emblem Elite always wins, so I never request there (If it isn't obvious yet, I'm a free user..grr) but anyone else? I'm begging you XD

I wish I could say ADD ME! on Facebook, but I'm not that open yet. Sorry, security reasons. hehe but to anyone who I fought previously in the PVP, congrats!

As for editing around here...well, I kinda want to, but I don't always have time...and I'm not that good really. Plus, there are a lot of people already here who are really good at it, so well...you know....

Yup I guess that's it....for now, I guess. So, thanks for visiting!

update(?) I don't play Ninja Saga that often anymore. There isn't anything new, so I'm getting bored. Plus I'm playing a new app on Facebook now. Anyway, se ya.

update(?)(again) hiya! so, i'm starting to play again, but only because of the event. Plus, the village looks way cooler for this aniversarry!!

Also, since I keep running out of heart of Kari, i've created another profile! My character there is named Reitan Tsuwamono (shocker again huh? accounts with either names most likely belong to me...) and I'm a thunder and wind user XD yup. I'll probably update again later, when I have more time. Thnks fr viewing!

Okay, so I found the game through the poll on this wiki, so I tried it. And honestly...it's pretty cool.

It actually has a lot of things very similar to Ninja Saga. You create your own ninja, go o missions, learn skills, and all that. Honestly, I wouldn't be surprised if the creator's the same as NS.

But its much more complicated than Ninja Saga. It has a lot more features, too. Like the missions have other things than just battles, and the battle format is slightly different. Items are different too, and all items have special effects.

It also has an arena, and something called a 'hospital' though both are still closed.

They also have NPCs. Skills (which is the equivalent of jutsus in NS terms) are also based on elements, plus physical (taijutsu) and mind (genjutsu). Though you can only choose one element.

I don't wanna write a full article about it here, though for anyone who's interested in knowing more about the app before playing it, please feel free to message me through this site or post a comment on my profile.

Retrieved from "https://ninjasaga.fandom.com/wiki/User:Nakamura_Ishimaru?oldid=34215"
Community content is available under CC-BY-SA unless otherwise noted.