"Soft Claw is another rabbit that has evolved into a human shape beast. It is good at stealing not only eggs but..."

Soft Claw is an anthropomorphic rabbit that is good at thieving eggs. It is a Rank S World Boss in the Hunting House during the Kari Gumi Vs Egg Hunting Bosses event. 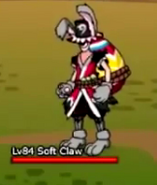 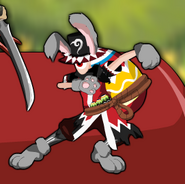 Retrieved from "https://ninjasaga.fandom.com/wiki/Soft_Claw?oldid=30148"
Community content is available under CC-BY-SA unless otherwise noted.