Start a Wiki
Shin (シン) is a Level 70 Jounin rank shinobi of the Hidden Fire Village. He possesses the Mokuton (Wood Release) bloodline (Ninja Saga does "Mogu" instead of "Moku". Mogu means "to pluck" in Japanese). He is also the instructor of the Academy.

When a player first starts playing Ninja Saga, he teaches you about the Attack, Charge and Run actions, how to use Jutsu, and helps you choose your first Ninjutsu element, and gives the player their first Ninjutsu with no cost. He also grants the player a kunai as a starter weapon. At the end of the tutorial, he informs the player that it was actually your Genin Exam. After that he will teach the player about the functions of each of the different structures in the Hidden Fire Village.

Shin also teaches the player about the Daily Task and the Daily Lucky Draw. He will be present in the Academy to teach players Ninjutsu, Taijutsu, and Genjutsu. When a player reaches to level 20, Shin will assist him/her in the Chunin Campaign during parts 2, 4, and 5. He can also be seen in Part 1 of Jounin Campaign explaining the rules of the exam, although he no real tips are given. In the Part 3 of the Jounin Exam, The Kekkai, Shin tells the player how to unseal the kekkai in the forest by choosing the correct types of runes and their orders. he is the ninja saga version of yamato.

This Section Is Incomplete.

Shin's Pose In The Updated Academy 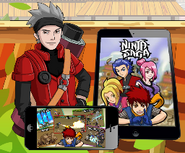 Shin Announcing Ninja Saga IOS On The Cover Of The Game 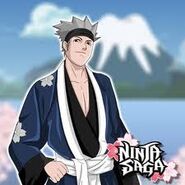 Shin In Choose the Right Target

Shin In The Final Part Of The Chunin Exam Original Appearance 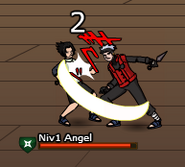 Four Column Kekkai
Add a photo to this gallery

Retrieved from "https://ninjasaga.fandom.com/wiki/Shin?oldid=38336"
Community content is available under CC-BY-SA unless otherwise noted.