"Shi To is probably a mixture of a rabbit and a lion. Shi To's attacks are fierce and could hurt a lot!"

Shi To is a fierce beast that resembles a lion and a rabbit. It is a Rank S World Boss in the Hunting House during the Kari Gumi Vs Egg Hunting Bosses event. 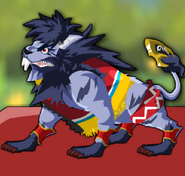 Retrieved from "https://ninjasaga.fandom.com/wiki/Shi_To?oldid=22547"
Community content is available under CC-BY-SA unless otherwise noted.