Similar to previous events, players must battle a list of foes. Each battle shall give a reward.

Also, for the event, the village has changed its appearance, as there are Sakura trees and blossoms all around.

Immediately following the events from Defend Fire Village, it is revealed that the Water Village has been attacked by the Jyubi, the ultimate tailed beast. Shin and Hokage Yudai talk about whether the Fire Village must also be prepared, which Yudai wishes it to. However, he decides not to cancel the upcoming Sakura Festival. Instead, he prepares a test for the ninjas of the village (the players).Yudai animates his Origami Monsters with Genjutsu , which the must be fought.

Here are the conversations of the characters in the event.

The goal of the players is to capture any of the Origami Monsters. To do so, they must use Scroll of Seal to seal the monsters, but at a particular amount of HP the monster has. This may be determined through the usage of the Futomaki Sushi.

Both the Scroll of Seal and the Futomaki Sushi are given as free consumables at the first log in of the player each day that the event is active. However, if the player's consumable items are at the maximum, the items shall not be added. They are also available at the Shop .

Each monster can only be sealed when they reach a certain amount left of their HP. Each monster has a different HP requirement, which makes the Futomaki Sushi important (unless if the player has the Intelligence Class Jutsu).

Each captured monster produces a reward. However, if the player does not capture the monster but defeats it, a reward will still be given, though not as much as for capturing the monster.

Each battle uses up 10 energy, and the maximum energy is 50. Players do have the option to get a Energy Capsule , which refills the energy bar with 10 energy.

There are a total of 4 battles to choose from.

These are the requirements of each beast before sealing them into the Scroll of Sealing.

Sakura Fest icon at the village 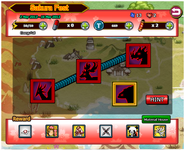 The battles which the player may choose from.

The village during Sakura Fest.
Add a photo to this gallery
Retrieved from "https://ninjasaga.fandom.com/wiki/Sakura_Fest?oldid=39847"
Community content is available under CC-BY-SA unless otherwise noted.