Start a Wiki
Player versus player (abbreviated as "PvP" and called Live PvP in Town) is a type of multiplayer interactive conflict within a game between two or more live participants. This is in contrast where players compete against computer controlled opponents, which is referred to as player versus environment (PvE). PvP for Ninja Saga was first released on September 21, 2009.

Player vs Player was released on September 21, 2009. Upon its release, no restrictions, with the exception of players required to be at least level 5, were made. However on September 29, 2009, restrictions were made and players could only use up to 5 consumable items per match or round. On October 2, 2009, chat filters were made in the chat. The NPC that hosted PvP was Aiko, brother of Shin and Ken, stepbrother of Anaki, and granddaughter of Chiyo, and cousin of Vadar.

At some point in 2011, PvP was closed for a long time. But a new PvP system was in closed beta testing since October 26, 2011 and a few amount of players were invited to test Phase 1 of the new PvP system.

On November 3, 2011, Phase 2 of the new PvP system was being tested in closed beta. Players who participated in Phase 1 received 100 Tokens at this point.

PvP went into open beta on December 30, 2011 and all players could test it but there was a limit on how many players could go into the lobby.

PvP was finally re-released in stability on January 19, 2012. On January 20, 2012, a private room was available for premium users where they could battle without getting their results recorded.

Ninja Saga confirmed to me that PvP will return sometime next month, which is in May 2013.

The old Arena, where Live PvP was located. 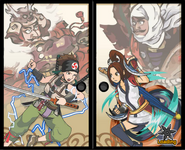 The new loading screen to the PvP lobby after the update. 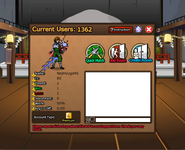 The main lobby in the Arena for the iOS.

Searching for nearby iDevices via Bluetooth.

Found a nearby iDevice after searching.

Waiting for the opponent to accept a PvP match on the iOS.

The Ready screen after the opponent accepts the match.

Battling against another player in PvP.

Waiting for the opponent to make an action on their iDevice.

Winning a PvP match on the iOS.

Losing a PvP match on the iOS.
Add a photo to this gallery

Retrieved from "https://ninjasaga.fandom.com/wiki/Player_versus_player?oldid=34225"
Community content is available under CC-BY-SA unless otherwise noted.