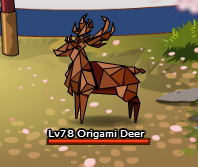 Origami Deer  is one of the Origami Monsters that appear in the Sakura Festival 2013 event, Sakura Fest. It appears with a geometric design and is brown in color. Its attacks are lightning -based.

To capture it, its HP must be 20% or lower than its total HP. It requires the standard 10 energy to battle, and also 1 Heart of Kari.

Retrieved from "https://ninjasaga.fandom.com/wiki/Origami_Deer?oldid=34467"
Community content is available under CC-BY-SA unless otherwise noted.