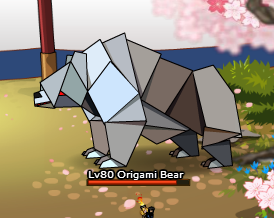 Origami Bear is one of the Origami Monsters that appear in the 2013 Sakura Festival Event, Sakura Fest. It is color white and black, and is geometric in shape, much like a folded paper. It's attacks are earth -based.

It requires a 10% remaining HP before using the Scroll of Seal . It is the only beast among those present at the event that require a Ninja Emblem or 20 Tokens to battle, along with the standard 10 energy.

Retrieved from "https://ninjasaga.fandom.com/wiki/Origami_Bear?oldid=34343"
Community content is available under CC-BY-SA unless otherwise noted.