Start a Wiki
Mamoru (まもる) is currently the Mizukage (水影; Literally meaning "Water Shadow")of the Water Village, suggesting he is the most skilled Ninja in the Water Village, whether this is due to his control over the water-element or his other abilties remains unspecified.

The player first encounters the Mizukage Mamoru during a mission from Hokage Yudai, in which the player is ordered to deliver a warning to the water village to protect their Ninja scroll.

Mamoru also makes another appearance during the "Relief Force to Water Village", offering his thanks to the player for their continuous efforts in aid of the Water Village. 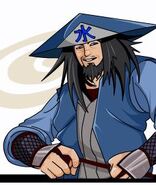 Mamoru's first appearance.
Add a photo to this gallery

Retrieved from "https://ninjasaga.fandom.com/wiki/Mamoru?oldid=39736"
Community content is available under CC-BY-SA unless otherwise noted.