"This masked beast, with body like a human but ears like rabbit is a fierce egg thief! The two katana is its..."

Kari Mori is a masked beast with a human-like body but with rabbit-like ears that is a fierce egg thief. It is a Rank S World Boss in the Hunting House during the Kari Gumi Vs Egg Hunting Bosses event. 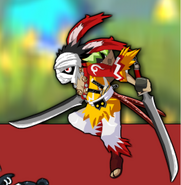 Retrieved from "https://ninjasaga.fandom.com/wiki/Kari_Mori?oldid=32951"
Community content is available under CC-BY-SA unless otherwise noted.