Ida holds little warmth for other villages, and believes in the independence of the Earth Vilage, believing it to be strong enough to support itself, without the aid of the other ninja villages.

During the Jounin Campaign, Ida is converted to some extent to the belief that the help of others is sometimes important and not always a testament to one's weakness. 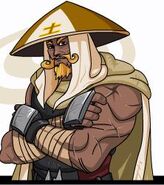 Ida's first appearance.
Add a photo to this gallery

Retrieved from "https://ninjasaga.fandom.com/wiki/Ida?oldid=39144"
Community content is available under CC-BY-SA unless otherwise noted.