The Hunting House is one of the various structures in the Fire Village, and offers the player opportunities to fight particularly powerful enemies (usually World Bosses), allowing for one kill of each enemy a day, with the enemy being renewed to hunt again at 12:00 AM server time. These enemies are usually very difficult to kill, regardless of their level, most possess very high HP, and often require the player to have a large amount of healing jutsu or items in their posession to last the fight, and/or the support of particularly strong NPCs or friends.

The Hunting House's interface was changed to a map on April 2, 2012 during the start of the Kari Gumi Vs Egg Hunting Bosses event and players can collect materials by defeating the world bosses in the Hunting House. However, battling against bosses have been more strict based on level after that time. And the Hunting House is now run by Akagi Iru, the vice-commander of Kari Gumi's team.

Until the end of April 18, 2012, where the Kari Gumi Vs Egg Hunting Bosses ends, during the event by completing the Practice and Prep set of the event, the player can activate the "Kari Tatsujin" which increases the materials dropped by world bosses by 1 until the end of the event.

Since the update from April 2, 2012, all bosses now have some purify and reactive force chance of at least 5%, making them slightly harder to kill.

Excluding festival enemies, there are currently 8 world bosses in the Hunting House.

Rank A World Bosses are not available yet. 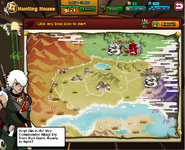 Rank C World Bosses in the iOS version.
Add a photo to this gallery
Retrieved from "https://ninjasaga.fandom.com/wiki/Hunting_House?oldid=35149"
Community content is available under CC-BY-SA unless otherwise noted.