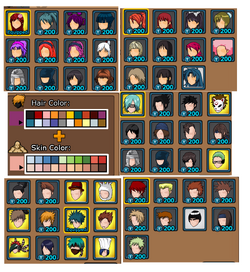 In the mobile version, hair styles are refer to as head styles. Each playable character has their own head styles that can be purchased from the Shop (since the Style Shop doesn't exist in the mobile) and can be customize from the player's character menu along with other gear.

Head gears obtained through events can be equipped to anyone or to certain characters.

Retrieved from "https://ninjasaga.fandom.com/wiki/Hair_Style?oldid=39482"
Community content is available under CC-BY-SA unless otherwise noted.