Please note that this is an article on the pet Gobi, if you are looking for the article on the event enemy in the iOS version then you should head to Gobi (enemy). For other uses, see the disambiguation page

Gobi (五尾, Literally meaning "Five Tails") is a dog with five white tails with black ends. The Gobi specializes in all five basic elements. When Gobi uses an elemental skill, one of its tails will glow with the color of the element but when it uses Secret: Five Tag Genkai, all of its will be highlighted their elements. The Gobi is a supportive pet in the Pet Shop. 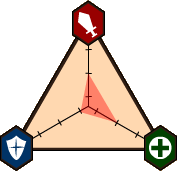 1 of 2
Add photo
Gobi in the iOS version specializes in all 5 basic elements but is classified as a Taijutsu/Genjutsu pet. Gobi can be purchased in the Pets Shop or on its event profile menu for 2,000 Tokens. It starts off with 30 attribute points distributed randomly. 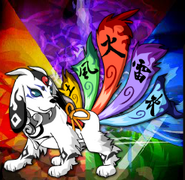 Gobi in the Tailed Beast menu.

Promotion for Gobi on the Ninja Saga Fan Page on Facebook. 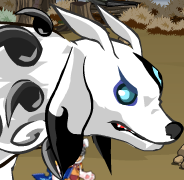