Once a day from June 7 to June 13, players claim a free NINspresso, which increases the user's attack damage by 50% for 5 turns after consuming it, but it cannot be sold.

Also, between June 14 and June 20, by purchasing a Ninja Emblem or a 7,500 Token package between that time, a player's character can claim Kinjutsu: Patriarchal Faith, which is a Genjutsu that increases the character's attack damage by 100% for 2 turns at a cost of 10 CP and with a cooldown of 14 turns. 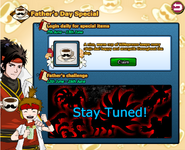 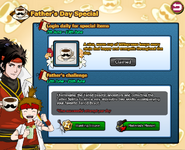 Father's Day Special on June 12.
Add a photo to this gallery
Retrieved from "https://ninjasaga.fandom.com/wiki/Father%27s_Day_Special?oldid=39860"
Community content is available under CC-BY-SA unless otherwise noted.