Start a Wiki
Defend Fire Village Chapter 3  is the third and final chapter of the Defend Fire Village event. It was accessible from April 12 to April 18, 2013. Like the previous chapters, it starts with a story followed by a set of different battles which the player can choose from.

After his previous attacks failed, Kojima will try to attack the village again, and this time he transforms into a giant serpent-like monster. For the last time, the player must defend the village to put an end to Kojima's terror. The mechanics for the battles is similar to the previous chapters, and there will be a different reward when the gauge reaches 100% before the time runs out.

The opening scene shows the same two characters as those in the previous, with the addition of Gedou Snake.

The objective is for the player to battle as many enemies as possible and defend the village before the chapter time is over. Take note that the amount of HP and CP a player has after one battle will be the same amount for the next battle. However, if a player leaves the battle selection screne and goes to the village, then the HP and CP bars will be filled.

Battles made shall increase the progress gauge. The gauge measures progress made by all Ninja Saga players, thus it increases when any ninja character plays. When the gauge is at 100% before the chapter time expires, then all players who participated in battle shall recieve the global reward, 30 Tokens and a Genjutsu, Bunny Rampage.

There are three battles to choose from:

Below is the list of possible rewards per battle; 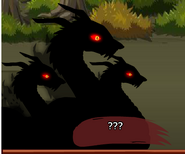 The Gedou Snake in the opening story.

The Gedou Snake
Add a photo to this gallery
Retrieved from "https://ninjasaga.fandom.com/wiki/Defend_Fire_Village_Chapter_3?oldid=34150"
Community content is available under CC-BY-SA unless otherwise noted.