Players can carry up to 200 clothing in their inventory.

The following lists for male and female clothing in the Shop are arranged by the price order in the Shop and alphabetically.

Event and other clothing

A list of clothing that can only be obtained by other methods or from seasonal and special events.

This list is incomplete and is not arranged in order.

Here are two lists of upper clothing that can be purchased from the Shop.

Here are two lists of lower clothing that can be purchased from the Shop.

Here is a list of upper and lower clothing that can be obtained through events. 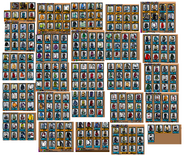 MALE CLOTHING WITHOUT SOCCER
Add a photo to this gallery
Retrieved from "https://ninjasaga.fandom.com/wiki/Clothing?oldid=39040"
Community content is available under CC-BY-SA unless otherwise noted.