Summon gravestones from the underworld to attack all target.

This talent basically, besides damaging the target, does not let the target do anything else but charge unless they use a debuff consumable or if they are special jounin and have the Sensor class jutsu, which clears all debuff from the user 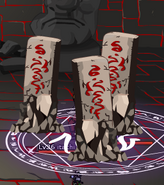 The skill's damage change
Add a photo to this gallery
Retrieved from "https://ninjasaga.fandom.com/wiki/Burial_of_Dead_Bone?oldid=38712"
Community content is available under CC-BY-SA unless otherwise noted.