He first appears in Part 4 of the Chunin Campaign with Kojima and they kidnap Ken. Yudai seems worried about him. In part 5, the main character, along with Shin and Genzu battles Kojima and Anaki. After the battle Kojima and Anaki escaped but they left Ken.

He and Kojima later appeared after the Jounin Campaign, seeking for the Orochi scroll, and creating undead puppets using Kinjutsu: Dead Bone Puppet to attack the Hidden Fire Village while they escape. However, the undead puppets didn't last long so Anaki used Kinjutsu: Dead Resurrection World to revive dead ninja but Genzu stopped them and engaged battle with him.

These are Anaki's skills during the Chunin Exam at the level of 35.

These are skills that Anaki used during the scenes and descriptions but not during the battles. 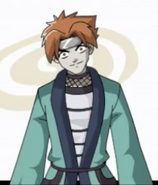 Anaki's first appearance.
Add a photo to this gallery

Retrieved from "https://ninjasaga.fandom.com/wiki/Anaki?oldid=38319"
Community content is available under CC-BY-SA unless otherwise noted.