Start a Wiki
The 3rd Anniversary event of Ninja Saga came out on July 17, 2012 and lasted until August 15, 2012. In the event, players can battle event world bosses in the Shinobi Anniversary Arena, purchase event items and Ninjutsu in the Materials Market with ribbons earned from the arena, and get rewards for spending Tokens during the event.

The Shinobi Annivesary Arena is an area of the Arena during the 3rd Anniversary event only where the player can battle world bosses to earn Primary, Intermediate, and Superior Ninja Ribbons and Winner Certificates, which are materials used to purchase event items or Ninjutsu from the Materials Market. If a player recruits a friend or two, the player will battle against 2 bosses at once and if the player wins, the player will be rewarded with 2 materials and can share 2 materials.

When a player's character defeats a boss, the player will be able to share some materials to friends on the player's Facebook wall and unlock another boss battle. Boss battles that are completed cannot be challenged again unless if the player completes at least 60% of the battles, where the player can choose to restart their progress back to 0% of the Anniversary Arena.

There are 5 boss battles in the Shinobi Anniversary Arena. The levels of each boss and Gold and XP rewards are the same as any basic world boss in the Hunting House. Recruiting friends will add an extra boss for the battle but the player's rewards and shares will be doubled.

After completing all of the boss battles, the player can claim a big reward such as 50 Talent Points or 10,000 Gold and reset their progress back to 0%.

The first boss battle on the bottom row is a ninja (or two if recruiting friends) from the Earth, Fire, Lightning, Water, or Wind Village that can be fought after defeating the first Mysterious Opponent but battling him costs 10 Energy Points, 1 Heart of Kari, and 1 Crystal of Kari. These ninjas uses Ninjutsu elemental attacks that are based on their village. Defeating the random ninja will reward the player a Superior Ninja Ribbon (or 2 if defeated two opponents) and can share the same amount on the player's Facebook wall and Gold and XP rewards are based on a basic world boss rewards.

The final boss battle on the bottom row is the same as the first boss battle on the bottom row except the boss battle also requires another Heart of Kari and Crystal of Kari and a Friendship Kunai, which can be obtained by successfully inviting friends to Ninja Saga and instead of being rewarded a Superior Ninja Ribbon, the player will be rewarded a Winner Certificate (or 2 if defeated two opponents) and can share the same amount on the player's Facebook wall.

During the 3rd Anniversary event, items and skills can be purchased from the Materials Market using the material from the bosses that were defeated in the Arena.

Between July 27, 2012 and August 16, 2012, a new feature of the 3rd Anniversary event was added, which is the World Ninja Athletic Games Event. Each day, by logging into Ninja Saga, the player's character can earn Olympus Medals, which are materials used to craft Olympus Series items in the Materials Market]]. The player's character can earn more medals daily by logging in each day consecutively.

This Genjutsu utilizes the power of Halos to reduce 50% of the target's maximum CP and removes all buffs from the target. This skill also hits the target with high accuracy and has a cooldown of 4 turns and a chakra consumption of 200 CP.

The town during the 3rd Anniversary event. 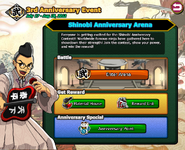 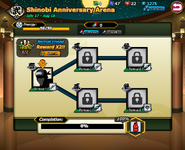 Shinobi Anniversary Arena in the Arena with no other battles unlocked. 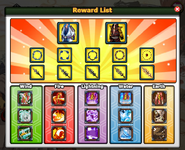 The reward list that would also appear in the Materials Market. 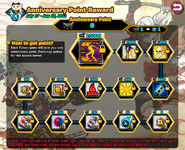 The Golden Ninja Scratch Card during the 3rd Anniversary before July 31. 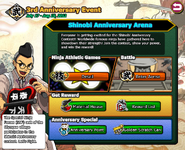 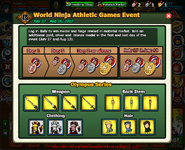 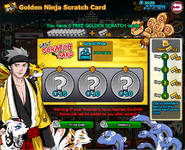 The Golden Ninja Scratch Card on July 31.
Add a photo to this gallery

Retrieved from "https://ninjasaga.fandom.com/wiki/3rd_Anniversary?oldid=39851"
Community content is available under CC-BY-SA unless otherwise noted.