Second part of the event

In the second part of the event, which takes place between June 14, 2012 and June 25, 2012, players can guess on the Champion and the Runner-Up on the UEFA Euro 2012 real-time event. The player can choose as many combinations of winners at a cost of 20 Tokens each. By paying 20 Tokens for the first time, the player's character can participate the event and will at least win the participation prize after the event is over and after the real-time event but the player's character has to claim it to receive it. 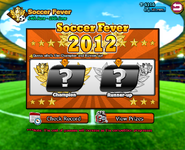 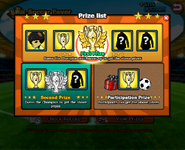 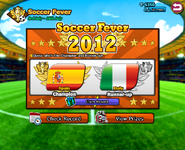 The winners of the UEFA Euro 2012 real-time event. Spain is the champion and Italy is the runner-up.
Add a photo to this gallery

Retrieved from "https://ninjasaga.fandom.com/wiki/2012_Soccer_Fever?oldid=39852"
Community content is available under CC-BY-SA unless otherwise noted.